Over the years I've been experimenting with home-brew roleplaying rules (such as Kevin's Krawl). Recently these experiments have taken the form of adventures on my Paladin's Quest blog.

One of the questions I've been trying to address was what type(s) of dice to use. I am not fond of the ubiquitous D20; it just rolls too much. Over the years, my preference for all games (including my home-brew wargames) has been for the classic D6. So much so that my initial attempts at RPG rules have featured a 2D6 system.

Earlier this year I switched to a D10. I made this change for 2 reasons:

I felt that a D10 satisfactorily addressed these two issues.
But now I am considering another change: 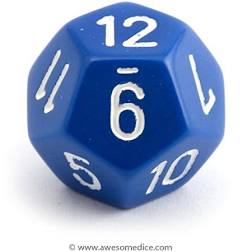 Not that there was anything particularly wrong with a D10 in terms of game play. However it has drawbacks when it comes to designing random rolls or tables. A D12 is more versatile because I can use it as a D2, D3, D4, D6, or D12.
I'll be experimenting with the D12 to see how it works.
Posted by Kevin at 11:00 PM

Email ThisBlogThis!Share to TwitterShare to FacebookShare to Pinterest
Labels: RPG