I'm experimenting with modern era rules to use for steampunk battles. Since I don't have my figures yet, I decided to return to the planet Zirconia, where the Federation is battling the robotic Dominion for control.

After defeating a Dominion attack, Tex's Tigers are once again on the advance. They are accompanied by a unit of mobile missile launchers (treating them like light armor). Their orders are to advance past the town of Jaynestown.
Note - this is scenario 3 - Breakthrough, from THW's Hell Hath No Fury.

The Tigers (blue) run into Dominion tanks. A shootout begins, but all shots ping off their armor. 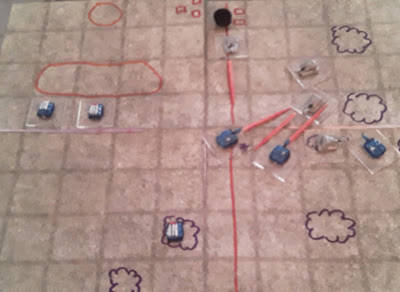 The missile launchers join the fray, damaging an enemy tank. 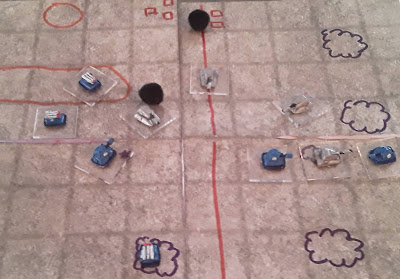 And then destroying it. 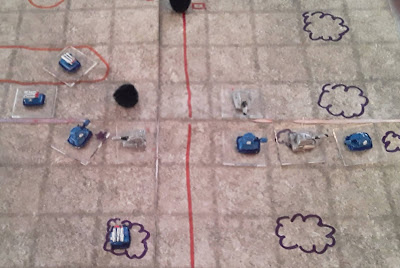 More enemy tanks engage, but they take a beating. They also leave the road into town unguarded. The Tigers make a beeline for town. 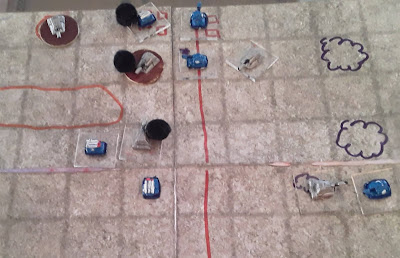 Tex advances through town. He'll be joined by 2 missile tanks. One is forced to retire. 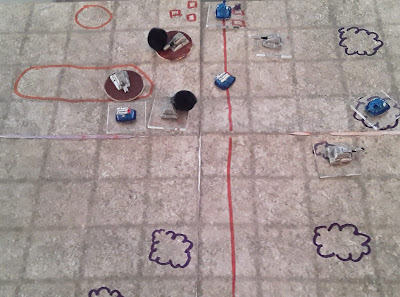 Unfortunately, one of the Tigers gets separated and then swarmed by the enemy. It puts up a stout fight but cannot defeat the heavy odds. 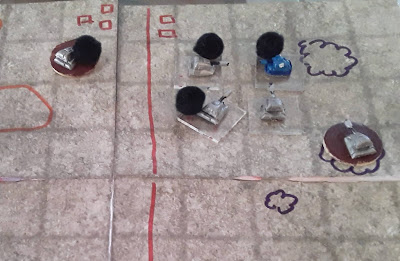 Despite the loss, Tex achieves his objective. The Dominion falls back in disarray, allowing the Federation to liberate the northern province (The Tigers win the campaign 3-1).

And Now for Something (Not) Completely Different
For my steampunk project, I am going back to physical terrain (as opposed to drawn terrain). I picked up some pot scrubbers and made some woods. I decided to give them a quick test.

The Tigers are advancing through an opening between wooded areas. 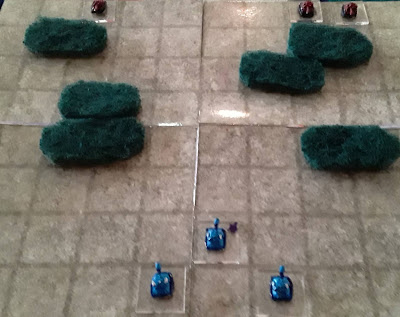 They get ambushed. One Tiger brews up! 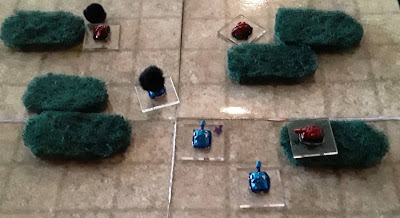 Although they damage two enemy tanks, they are forced back. Another Tiger is destroyed! 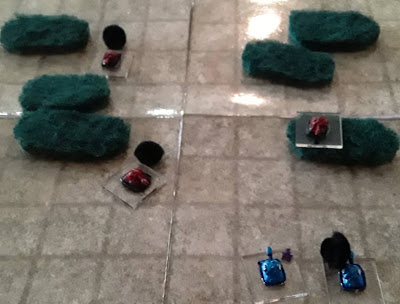 Conclusion - my new woods look much better for photos!

Rules Thoughts
Tex's battles have been fought with a variant of Age of Heroes, a sci-fi skirmish set I found on Lead Adventure Forum. Recently, I noticed that they work similar to my MicroBattle rules. Oddly, that makes me feel less bad about tinkering.

Anyway, I made some changes. I found that I kept forgetting the units' Attack and Defend/Armor stats. I had to keep referring to the rules. I like it when I can play without referencing the rules. I decided to simplify.


Defending
I used these changes in the Breakthrough scenario (above) and found it far more intuitive. I'll have to experiment with some infantry on the board.
Posted by Kevin at 2:00 AM No comments:

Email ThisBlogThis!Share to TwitterShare to FacebookShare to Pinterest
Labels: Sci-Fi

Before I begin my update, here is a little inspiration:

Similar to the aesthetic I envision (especially the Germanic "bad guys").

The project has begun to take shape. I debated a bit whether I should use Oddzial Osmy (O8) 3mm or Irregular 2mm. I went with 2mm because Irregular allows you to order small quantities (sorry O8, I don't need 15 tanks).

I also ordered some felt and cork tiles from Michael's so that I can make some battlefields. While the flip mats and markers are easy to use, they don't look quite so nice. I decided to return to modeled terrain.

For rules, I am using a variant of Age of Heroes. I am incorporating some ideas from my experiment mashing together Age of Heroes with Hell Hath No Fury. This new variant will use the activation rules from Squad Hammer, although I'll try out a couple of tweaks I just devised.
Posted by Kevin at 2:44 AM No comments:

Email ThisBlogThis!Share to TwitterShare to FacebookShare to Pinterest
Labels: steampunk

As I mentioned last time, my LARP friend and I are working on new LARP rules inspired by TankLarp. Things are proceeding well - we have the basic combat rules (essentially a mash-up of Amtgard and TankLarp) and even an outline of class rules. I don't know when we'll get to playtest; COVID is just too rampant in my neck of the woods right now to risk meeting.

But this latest craze of ours has me thinking about a new miniatures project. Given that our current setting is more turn of the century, I started poking around with steampunk rules. While I do have In Her Majesty's Name, I don't want a 1:1 skirmish. I'm looking for something with 1 base = a squad or 1 vehicle.

I recently picked up Land Ironclads. I'm still perusing it. 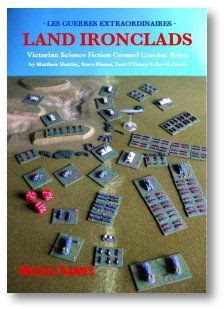 It may be more armor-heavy than what I am looking for. I primarily want infantry battles (like our LARP) with a smattering of heavy weapons / armored contraptions. I will probably end up modifying Age of Heroes but hope to use LI's unit stats as inspiration.

Rules are one quandary I'll need to solve, but the second involves miniatures. I am really tempted to get period-specific miniatures. This flies in the face of my generic army approach, but I am haunted by visions of steampunk walkers and tanks clanking across the battlefield while infantry scurries from cover to cover. I am pretty sure I'll do it in 3mm, although 6mm or 10mm are tempting. I just feel that vehicles will be too large in those (comparatively) larger scales. I do like the LI vehicles offered by Brigade Models, or I could just get some WW1 figures and give them a paint conversion.

I am also thinking of a new (actually old) approach to the battlefield. Lately, I've been using flip mats with dry erase markers. However, I am now in a mind to creating a felt battlefield like I used to use. Here is an example: 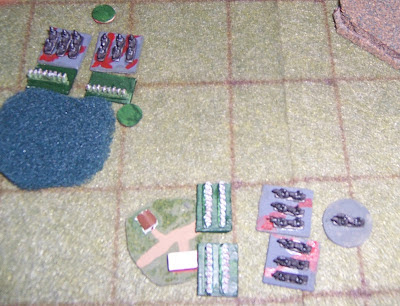 Stay tuned as I ruminate about this new project.
Posted by Kevin at 4:00 AM No comments:

A friend and I have been working on the rules for a new LARP when he decided to throw a curveball at me.


It's inspired by this - TankLarp


If you watch the video, you'll see that TankLarp is a curious mash-up of medieval and modern. And they do have armored vehicles (armored personnel carriers actually). We wouldn't do that.

My friend's initial idea was a LARP using World War I level technology. That has us off and running. Here is a quick backstory I ginned up.


Many years ago, the inhabitants of the northern continent of the planet developed advanced machine age technology. However, two great alliances formed – the free states and the evil empire. War broke out. In the bitter conflict, the evil empire was defeated, but the entire continent was devastated.

The few survivors took the remnants of their technology, fled to, and settled the southern continent. There, they encountered an array of cultures, predominantly of a medieval technological stage of development. With limited access to materials necessary for machines, a hybrid society developed where modern firearms supported rather than supplanted old-fashioned hand-to-hand combat.

But as this new society stabilized, a new threat emerged. A reborn evil empire has arisen in the east and is slowly conquering its neighbors. The evil empire has sent agents into its opponents’ nations to foster discontent, stir up conflict between nations, and foment armed insurrection.

This gives us an excuse to mix medieval and firearms. I'm now on a steampunk / dieselpunk kick. I added firearms (i.e. Nerf blasters) to the combat rules and am researching garb. I think early 20th century (especially Boer War and Boxer Rebellion) uniforms would work well for muggy Florida. Stay tuned for more developments.
Posted by Kevin at 2:28 AM No comments:

Email ThisBlogThis!Share to TwitterShare to FacebookShare to Pinterest
Labels: LARP

It seems fairly typical for my wargaming productivity to drop off in the summer. So what's my excuse this year?

Too Hot!
I have a bit of painting to do but have been reluctant to work on it. It's probably because my painting area is in my garage, which gets very hot and muggy in the South Florida summer months.

Video Games
I've gone on a bit of a video game kick lately. I mentioned the Untitled Goose Game. Recently, I started up a new game of Skyrim. 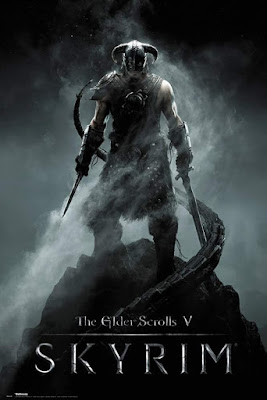 Yes, I've beaten it before, multiple times. It's an old one but still a good one. It's satisfying my fantasy itch that I can't scratch with LARPing (thanks COVID).

LARPing
While I can't LARP right now, I can still make preparations. My friend and I have had our fill of Amtgard, so we decided to create our own system. We're going to call our new kingdom Elzwehr (a take on Elder Scrolls' Elswehr).

Right now, I've been working on a draft rules system, which not only includes combat rules but the in-game social hierarchy and eventually a simplified class system.
Posted by Kevin at 2:08 AM No comments:

Email ThisBlogThis!Share to TwitterShare to FacebookShare to Pinterest
Labels: Miscellaneous

While this blog focuses on miniature and role playing games, I do enjoy video games and occasionally like to post about them. Recently I've been playing one that I just have to write about. 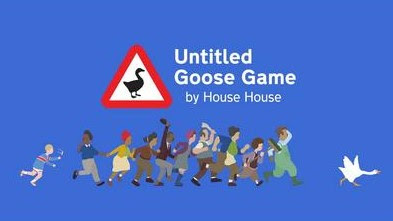 It's a very simple game, but it is an absolute blast to play. You are a mischievous goose running amok in an otherwise quiet village. You have various tasks to perform, but you need to figure out how to complete them when opposed by irate residents. It's a masterpiece of a puzzle game.

UGG is available on the major consoles as well as for the computer (I played on the Nintendo Switch). Highly recommended!
Posted by Kevin at 2:00 AM No comments:

It is becoming a tradition that I celebrate American Independence Day with a Revolutionary War battle. Rather than recreate a historical event, I decided to start a fictional campaign set in my home state of Florida. This is now the 3rd battle (spread over the past 3 years).

Empowered by the Georgia legislature, Col. James Endicott invaded East Florida, intent on capturing St. Augustine. His initial confrontation with British troops ended in defeat, but he reclaimed the initiative with a victory at Alligator Creek.

Now, Endicott continues his advance toward St. Augustine. As he approaches the native village of Havacoolwun, scouts report that the British had fortified and garrisoned the settlement. Endicott orders an attack.

The American forces (in blue), consisting of 3 companies of militia, a squadron of dragoons, an artillery battery, and a company of Overmountain men (light infantry), advance. 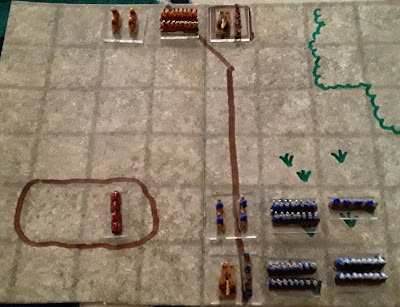 The dragoons attack British rangers on the hill. The rangers make effective use of the wooded terrain and hold off the attack while British dragoons ride to the rescue. 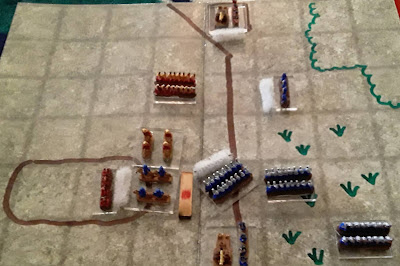 What should have been an easy victory for the American horse turns into a bloody scrum. 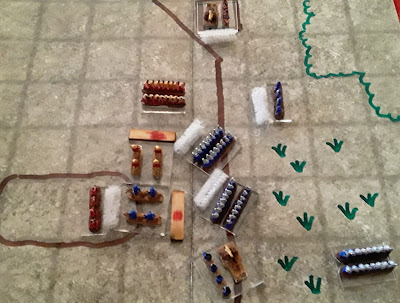 Coming to the aid of the American horse, the Georgia militia blast the British dragoons to smithereens. 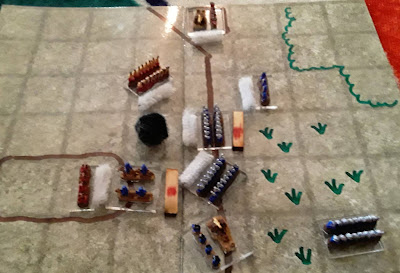 But the British annihilate one of the militia companies. 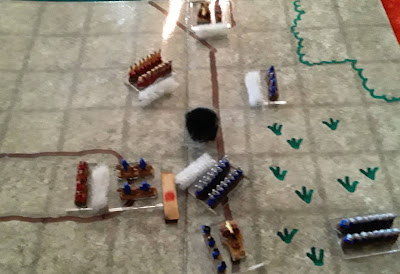 FINALLY! The American horse overruns the rangers. The Overmountain Men advance and start shooting at the British artillery in the fort. 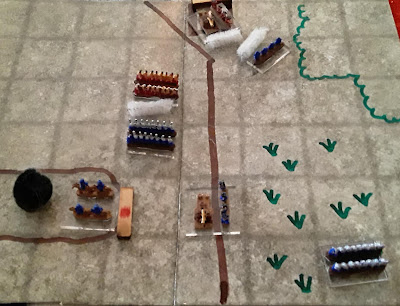 The Georgians swarm against the British infantry, but another company of militia routs. 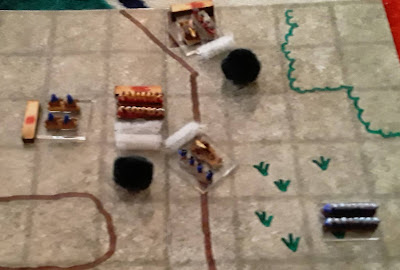 At this point, the light is fading. Endicott realizes that he cannot take Havacoolwun before dark. He orders his troops to disengage back to the hill. The fort will have to wait for another day.

Notes
Col. Endicott is now 1-2 in the campaign. He needs to break through and attack St. Augustine soon, or else the campaign will be for naught. Stay tuned for Part 4 next July 4th.

Fortunately, the real American cause did not rely on Endicott, and the American forces were victorious. Feel free to read my reflections on the 4th on my Paladin's Quest blog. Have a great weekend everyone!
Posted by Kevin at 3:33 AM No comments: