This past week I continued playing around with my mash-up of Age of Heroes and Hell Hath No Fury. I'm simply calling the rules Heroes' Fury (HF).

The Troll
Scenario 2 from Hell Hath No Fury. Tex's Tigers have been ordered to seize a vital bridge. Unbeknownst to them, there's a "troll" guarding the bridge.

The attack starts off well. The Tigers wipe out 2 squads of enemy infantry. 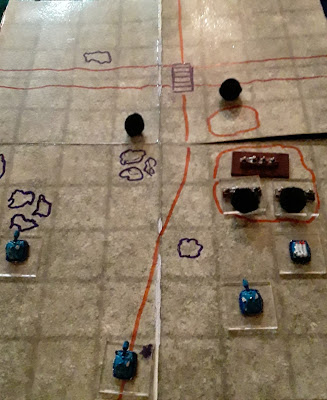 But things go sour when Dominion armor and artillery counterattack. Then the "troll," a super-heavy tank appears (I gave it 3 hits + the Big Gun trait) 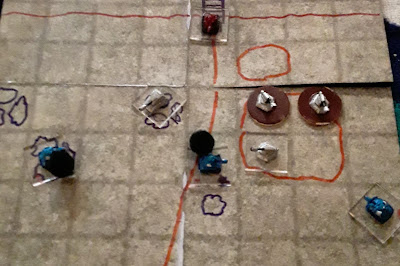 The Tigers swing around the right flank. Tex's tank is crippled. 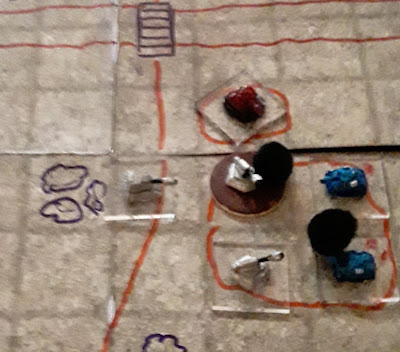 Tex and his crew bail. They hitch a ride on Tiger 2, which skedaddles from the fight.

The bridge remains in Dominion hands.

Tex had a tough fight on his hands in this one, made more difficult because HQ (i.e. me) reduced his force by 1 vehicle. I figured that I had reduced the potential enemies, so I should also reduce the attackers. I guess the scenario was not balanced to begin with!

I only made one minor rules change. Upon being damaged, a tank had to roll morale otherwise it fled from the fight. I did not apply it to the Tigers, figuring that their morale was excellent (and it would have left the Tigers short-handed very early in the battle).

Fighting Withdrawal
Scenario 6 from Hell Hath No Fury. After the Tiger's were repulsed by the Troll, the Dominion launches a counterattack. The Tigers set up a defensive line, with aid from the missile-armed Hornets.

The Dominion attack includes self-propelled artillery, armor, and infantry. Their first salvo falls short but the Tigers response destroys some infantry and damages a tank. 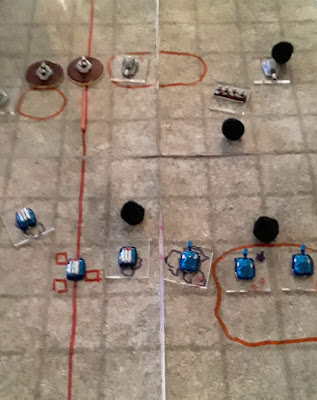 The Hornets' armor hold up. Again, the response is lethal. 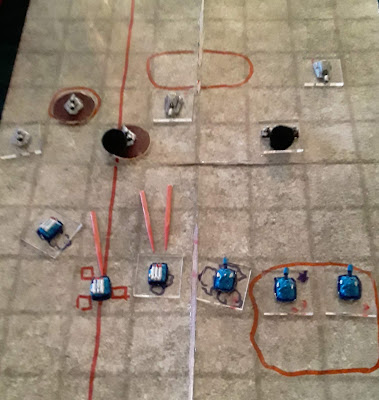 Tasting victory, the Tigers sortie from the defensive position. 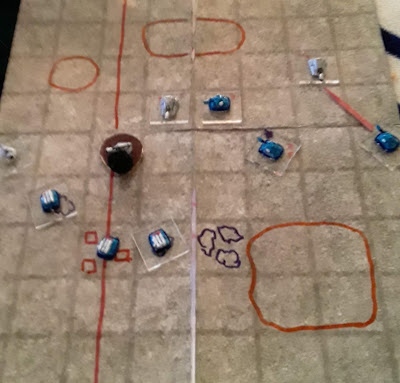 And quickly mop up the rest of the offensive.

I skipped scenarios 3 - 5 because they were more attacks, and it did not seem to make sense from a narrative standpoint. After being defeated, I thought it made sense that the Tigers would retreat with the enemy on their heels. Scenario 6 was the first with the player on the defensive.

This scenario was very much to Tex's advantage. Basically it was like shooting fish in a barrel. However, there wasn't much maneuvering so it wasn't the most interesting scenario.

I forgot to apply the morale rule I introduced last game, but it did not really make a difference.
Posted by Kevin at 2:00 AM

Email ThisBlogThis!Share to TwitterShare to FacebookShare to Pinterest
Labels: Sci-Fi