Rangers Run for It

Although I initially said I was going to do a 15mm sci-fi project, I ended up ordering some 6mm from Khurasan. I spent some time over the weekend painting them, but could not wait for them to dry. I decided to run a quick scenario using wooden figures. In particular, I wanted to experiment with a Pluck roll akin to In Her Majesty's Name, as discussed earlier.

Game Report
Our heroes are investigating a derelict ship when a detachment of Imperial troopers board. Ace and "Spades" need to make it back to their docking bay.

They run into some Imperials. Ace blasts one. 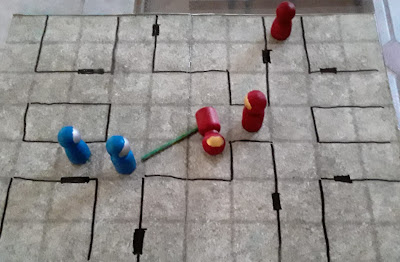 Then Spades takes down another. But Imperial reinforcements are on the way. 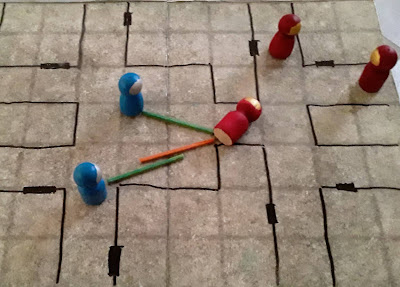 A blaze of fire. Ace is hit, but shrugs it off. (Ace failed his Pluck roll but used his hero point to ignore the wound) 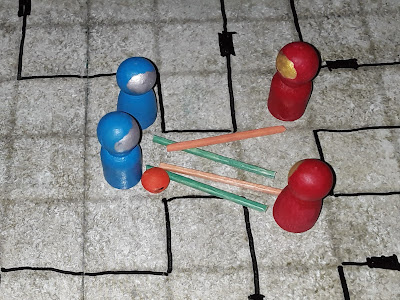 Ace rushes a trooper and bludgeons him. Spades downs the other Imperial. 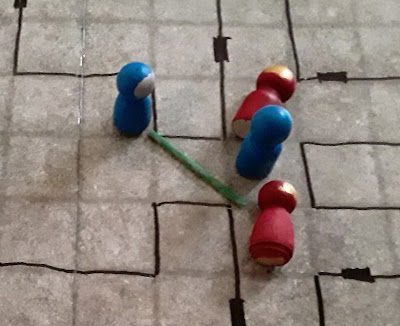 The way is open and they make it back to their ship.

Notes
Overall, the new rules worked out well. The proportion of hits to misses and of Pluck saves to fails seemed appropriate. The addition of a hero point for the main PCs seemed to resolve the issue of losing a hero too easily. Things look promising and will warrant more experimentation.
Posted by Kevin at 2:00 AM